“Before all else, be armed.” 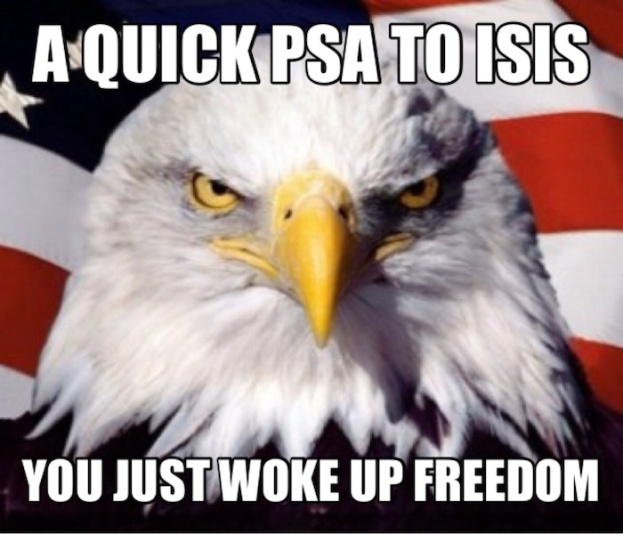 Abstract: A constructivist approach, through virtue of a regional strategy, with three essential elements, is needed to defeat ISIS. The first involves rolling it back in Iraq and Syria by attacking its capabilities and strategies. The second is to contain it by helping fortify weaker Arab countries that might be at risk. The third is to influence the relationships between Saudi Arabia, Turkey, Jordan, and Iran, countries whose efforts will be required to defeat ISIS and end the conflicts in Syria and Iraq.

While tyranny has existed in all eras, modern democracies now face a millennial version that seeks to impose by revolutionary force a monolithic collective in which all individual liberties will be submerged. Beginning with the Jacobin Terror of 1793, it has continued through Bolshevism, Nazism, Maoism, the Khmer Rouge, and today’s international Jihad. Terrorists are tyrants in waiting. They are not motivated by poverty or lack of opportunity, but by the vision of a coming collectivist utopia that will annihilate the West. Before democracies can fight tyranny effectively, they have to name it for what it is and understand what drives its adherents.

A‌cross the world, we are witnessing both a heroic ‌struggle for democracy and the disturbing strength of tyrannical regimes and movements. Whether it is civil war in Syria, Russian aggression, or the threat of ISIS, democracy and tyranny are in a dead heat.

While American forces are now engaged against Jihadism in the Middle East, self-identified Muslim terrorists are conducting brutal attacks on American soil. Yet President Barack Obama, while condemning “terror” in general terms, avoids the term “Islamist terrorism” and even assures us that ISIS, which aims to establish a worldwide Caliphate, “is not Islamic.:”

How should the West respond? Do we understand the nature of these adversaries?

The traditional understanding of globalization views power as a means to an end; though the quest for power can also become an end in and of itself.  The concept of power in IR theory remains the independent variable in shaping international peace.  However, IR theories continue to serve as redistributed pathways in which the modernized forms of power flow. Stemming from neorealist theory, confronting ISIS requires a total of three steps, with aspects from all three approaches, towards a regional strategy. The U.S. will obtain the capability to fight ISIS through use of military means, this is also necessary in strengthening the military and political capacity of individual Arab states at risk. Moreover, it will need to move beyond state/international-specific strategies towards a regional effort to manage the relationships between opposing powers. Turkey, Iran, and Saudi Arabia have all added to the subsidized instability that has allowed the Islamic State to flourish. This essay surveys major theories of international relations as signposts to understanding globalization; assesses new forms that power takes in international relations; and examines these issues within the context of the nature of the threat posed by ISIS. Through virtues of all three IR theories, a regional strategy is required to defeat the Islamic State. The first demands rolling back U.S. troops in Syria and Iraq, by advancing military capabilities and strategies, the second step incorporates an effective approach towards containment, which calls for mandatory US military involvement in assisting weaker Arab territories of U.S. military enhancement, and finally; the third step is to influence and strengthen the relationships between states throughout the region, whose efforts will be required to defeat ISIS and end the bloodshed in Syria and Iraq.

There are two different sides to this issue: How we can apply these theories to the way that ISIS acts, and how we can apply these theories to how the rest of the world is reacting, are the questions we must first analyze to better understand the nature of the threat posed by ISIS, and the nature of the threat the world poses on ISIS. In retrospect, neorealism defines anarchy as the generating factor constantly contributing to the means for ongoing competition throughout all other states within the global arena. In anarchy, states are constantly competing for markets, security, and influence. The nature of this competition is “zero-sum,” which means that more for one actor would mean less for another. In order to describe the role that human nature plays to the Islamic State, an explanation of the first of Waltz’s three images contributes in developing a resolution based on the neoliberal perspective, stating that all individuals matter in IR theory. This perspective concludes with describing humans as a presumably violent species. Looking at this concept through the lens of the Islamic State, one could argue the Islamic State’s aggressive behavior towards non-Sunni Muslims and governments is a natural product of human nature. However, we can form a rebuttal with contending the theory that only some individuals are inherently evil by nature, but we all have the potential to become good. Furthermore, the Islamic State generally views state behavior through the lens of the anarchical system.

First, US-led military operations against ISIS are taking place against the battle lines of civil wars in Syria and Iraq, with the additional complication that ISIS has conflated these conflicts by essentially erasing many of the border areas separating these countries.. Unfortunately, military operations cannot be entirely cut off from the civil wars. Hence, the accidental consequences from these operations could exacerbate the conflicts; inadvertently strengthening opposing forces threatening the United States. Through Realism, the goal to defeat ISIS is seen as a means of obtaining power through self-help tactics. By abruptly dissuading the plans to invoke a strategically founded attack by U.S. personnel, neorealism in theory, serves as a dividend to compromising ISIS’s military capabilities.

Reducing western influence in the region should be the second step in the process towards defeating ISIS. By capsizing what is perceived by some to be an oppressive order in the Arab world, and erasing artificially imposed boundaries between Syria, Iraq, Jordan and Lebanon transcend ISIS’s battles in Iraq and Syria. Through the neoliberal perspective, there is a drive to allow for self-determination and the rights of the people. By other states intervening in a more indirect way, they are forcing regional conflicts to be resolved by self-determination through cooperation. The United States can also help prevent ISIS’s military and terrorist expansion into these states by assisting other Arab governments. By increasing their internal capacities, we can reduce the risk and expansion of the Islamic State.

Finally, a change in US strategy towards working constructively at the regional level must be applied. We are not just facing a threat from ISIS, but a proliferation of jihadist groups with shifting coalitions. Rivalry between ISIS and al-Qaeda could result in new coalitions and even new groups. Beyond the Middle East, groups like Boko Haram in Nigeria and al-Shabaab in Somalia have established strongholds from which to attack local populations and US interests. Defeating ISIS may be necessary, but insufficient for eliminating the threat to the United States, and its allies in the region. In fact, the consequence of defeating ISIS may be the strengthening of other groups, the spawning of new ones, or the formation of new formidable coalitions between existing groups.  The final part of this regional strategy requires military efforts by the Defense Department, be augmented through coordination with the State Department and other agencies within the executive branch. Absent this coordination, military actions alone are unlikely to be effective. Further collaboration between the major powers of the region will be necessary to stabilize Iraq and Syria and defeat ISIS. Collaborative efforts between the adversaries (Iran and Saudi), are informal, and relations remain stagnant with strong feelings of animosity. The United States is in a unique position to manage the distribution of power throughout the region, should potential conflicts emerge from within the region. U.S. will use its prestige in contributing to brining peaceful solutions, instilling harmony throughout the region. American enhancement is a critical component in harboring the likelihood of overall successful outcomes. The threat that ISIS poses to the region creates an opportunity for unity amongst Turkey, Egypt, Saudi Arabia, and Iran. If successful, U.S. forces could effectively contribute to helping reassess each state’s power in the region. This allows for higher likelihood obtaining effective cooperation amongst states throughout the region. The U.S. can use its hegemonic advantages to influence the demise of tensions and conflict within Syria and Iraq.

The power to affect which direction the world will take in the 21st century lies with a new generation of leaders and strategic thinkers who are, themselves, a product of this evolving global era. Three major paradigms of international relations provide an important basis for examining the relationship between globalization and security. In the midst of describing the nature of the threat posed by ISIS, this essay sets out to loosen the basic restrictions of the realist approach. By strategically combining the overlapping qualities held by each of these paradigms, the theories of neorealism, neoliberalism, and constructivism are predicted to produce most effective change towards a successful alternative in US strategy. By simultaneously invoking certain aspects of each theory’s hard and soft power,the proficient use of diplomacy through U.S. military force,resulting the softening of relations with Iran and the Islamic State. hard power and soft power go hand in hand. may be used simultaneously in attributing a ripple effect, Absent this coordination, military actions alone are likely ineffective.

This site uses Akismet to reduce spam. Learn how your comment data is processed.