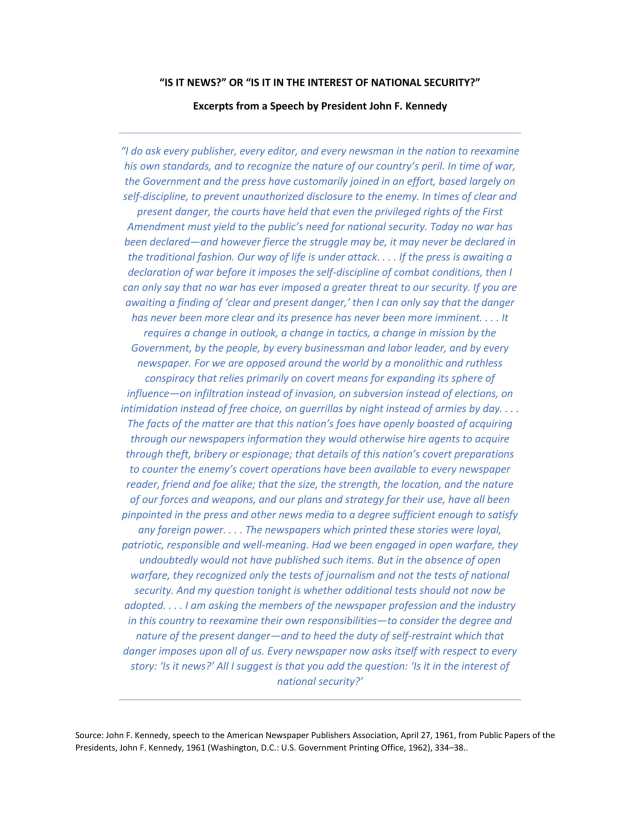 This excerpt from a speech given by John F. Kennedy is one of the most legitimate and accurate responses to the illegitimate reporting, underlying deceptions, and false claims spewed and depicted by U.S. media, now and then.

In his address, Kennedy was exposing the multimillion dollar news outlet corporations who are currently waging a war on the Trump Administration today, and who in turn, have essentially become the most dangerous threats to the national security of the American people. Kennedy addresses this issue in stating the claim that, “If the press is awaiting a declaration of war before it imposes the self-discipline of combat conditions, then I can only say that no war has ever imposed a greater threat to our security. If you are awaiting a finding of ‘clear and present danger,’ then I can only say that the danger has never been more clear and its presence has never been more imminent. . . .” In other words, how could the public interest be of any concern to those who stand to gain such benefits and symbiotic relationships with their fellow elite? So long as they stay in power, they have the tools to manipulate, sabotage, corrupt, and even destroy a nation—literally.

The truth of the matter is, our nation’s national security is not at the heart of the concerns of those who seek to reap the benefits of their own ratings and monetary gains. Common sense and foreign analysis prove that America’s implementation of deterrence to deter nuclear threat and to secure the protection of our nation and its allies, is in no way a threat to the American people, nor is it a threat to any other countries abroad. In sum, the underlying issues with such propaganda continue to be hidden by the entities lurking about the fake news media, the only difference is that our generation cannot take a moment to glance up from their screens and see the world for how it really is– not how it is depicted in cyber space. Although, if you won’t trust any politician, perhaps you will listen to a guy we can all agree with. “Life moves pretty fast. If you don’t stop and look around once in a while, you could miss it.” The real world is an enlightening endeavor. The 21st century can either make or break you. Your potential to explore the gloriousness of its vastness lies in actual space, not cyber space. Ferris knows it, Kennedy knew it, Trump knows it, I know it, and you could know it too. Just look up.

One thought on “NoteWorthy”

This site uses Akismet to reduce spam. Learn how your comment data is processed.